I recently launched an idea I had been thinking about for quite some time called Problem of the Day. If you haven't checked it out the basic run down is a new programming or logic puzzle every Monday through Friday. Most of the problems are meant to be solvable over breakfast, lunch, or whenever you have some free time.

My goal for this post is to give you some ideas on what I did for my launch so that you can see what went well and not so well so that we can all learn.

I purposely left the site as open ended as I could so I could easily pivot to a more popular idea if deemed necessary. If people didn't like logic puzzles I could move to programming problems or vice versa. I could also make it work by pitching the site as an interview problem per day. In the end the most important thing I've found is that when people go to the site they know it's purpose exactly. No marketing video or elaborate parrallax site just a 1 sentence pitch, "A new programming or logic puzzle every Mon-Fri".

Hate it or love it, buzzword or not, social media can spread a message to millions at an insane speed. I've built up a small following from posts on this blog so I was able to get problemotd in to the eyes of a few readers who were well connected on social media. Using my existing network definitely helped to get the site out to more people. There are also a lot of bots on Twitter that function as rss feeds and pull from a set group of peoples' feeds. These bots will usually find you and there's nothing you can do but put out good content and hope the creator finds you. Having a few of the good ones following you can definitely pay dividends.

This is arguably the most important step. Forums, time and time again have proven to be one of the best ways to drive traffic to your site. Site's like Reddit are great as they provide a single forum with a ton of different genres. The Reddit and Hacker News communities have been good to me over the years so I came up with a two part approach for my post. Since problemotd does logic puzzles AND programming problems I decided to target each community based on the problem for that day. The first day's problem was a logic puzzle. For the past few weeks fun logic puzzles had been hitting the front page of Hacker News so I thought it would make for a good target for launch day.

On March 5th I made a post to Hacker News (Show HN: Problem of the Day) and Reddit (King's Gold). I made the posts around noon EST as that is lunch on the east coast but also breakfast on the west coast. With Hacker News you need about 3-4 upvotes in the first hour to stand a chance. This will usually get you to the front page which is where a majority of the users get their content from. I only managed 2 votes in the first hour and the site ended up bombing the first day.

For my Reddit post I went with a self post to try and fit in with the r/puzzles community more. If you haven't been part of community for a long time it's best to try and fit in as much as possible rather than trying to jam a product down their throat. The r/puzzles community doesn't get as many submissions as a lot of the other subreddits out there so my post is going to stay up there longer and more people are going to see it. By not directly linking the post to my site I also get the chance to explain what my site is which is a win win for everyone involved. I also got a ton of great feedback on my site which was super useful. I even managed to snag 2 or 3 subscribers from this post.

March 6th proved to be the site's defining day. Day 2 of my two part plan was to host a programming problem. If day 2 failed then I would need to look in to refocusing the site or maybe looking for another community to overlap with.

To prevent coming off as spammy I didn't submit to Hacker News but I did submit this post to r/programming over on Reddit. One of the great things about this subreddit is that has over half a million subscribers and doesn't get too many submissions so your posts will always start out on the front page. Not to mention the feed also gets pulled in to other sites such as hackurls which only builds up the potential viewership.

Posts to r/programming are very do or die. If the first vote you get is a downvote you're pretty much booted to the bottom of the frontpage if not the dreaded second page. If this happens you can pretty much kiss the post goodbye as there just won't be enough people to see it in order to get it back up to the front page. Well of course the first vote my post received was a downvote. 20 minutes in to the post and I'm no longer on the frontpage, I'm dead in the water.

Well...not quite. At lot of these user curated content sites can be gamed. What I mean by that is that if you know enough users of the site you can have them upvote your stuff for you. It's true that I owe the early success of this site to a group of about 6 people who came through in the clutch to upvote my post off the second page and well to the top of the frontpage. From there the rest is history. The users of r/programming took over and netted me an additional 350 subscribers and 40000 unique visitors.

One thing I've learned is always take advantage of the short time you have in the early spot light. This is when users will be most vocal about features they'd like to see. If people feel like they can get in earlier and contribute to the success of a site they're more likely to spread it on their own. Another thing is to always have a backup plan. The site went down as I was boarding a 6 hour flight with no wi-fi. Your site will crash at the worst possible time because that is just how the internet works.

For those curious it ended up being a database transaction issue though the Reddit group seemed to like the idea of it being the classic Reddit hug of death (too much traffic). The nature of the site being about solving problems kind of lent itself well to the issue as people kept looking for hidden meaning in Heroku's default application failure page. All in all I got about 400-500 upvotes while the site was down which was great. Though, while it may have lead to some additional exposure I also lost out on a lot of potential subscribers/daily users.

Whether you decide to use Google Analytics or some other service you need to know as much as you can about your users in order to try to meet their needs. One example in my case is that about 65% of my users are based in the Western Hemisphere (USA, Canada, Brazil). Therefore I send out my daily newsletter and release a new problem at midnight EST (-4 GMT). If I had found most of my user base to come from Austrailia I'd have adjusted my server clocks to account for that.

Another great analytics service is AddThis. These are the guys responsible for all the social share icons on pretty much every site including this one and problemotd. They'll show you where and how you're users are sharing your content. My AddThis analytics looks like this: 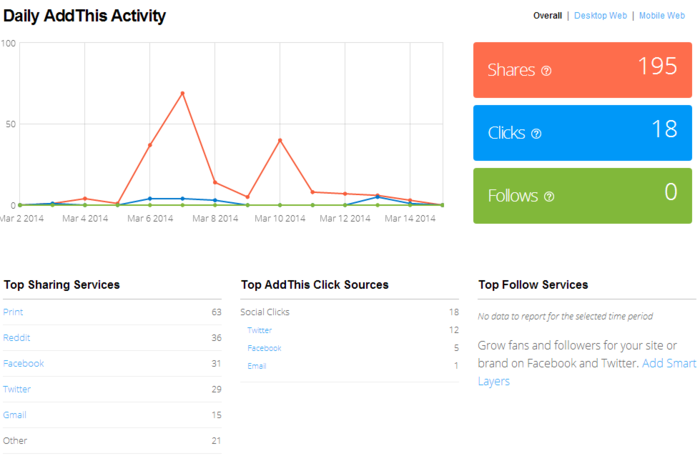 So it would probably be wise of me to look in to making a better print css in order to target the users who like to print the problem each day. It also shows on March 10th I got a lot of traffic to the site even though I didn't personally make any specific posts about it. So I can go and look at the problem and see what type of problem it is so that I can try and craft more like it. As it turns out March 10th's problem was The King's Wine which is a logic puzzle.

I'm also using Mandrill for sending out e-mails. Along with making mass emails easy they also provide analytics such as how many times a message has been opened and how often a link inside the message is clicked. This can show me who my most engaged users are and allow me to personally reach out to them for feedback on the site if I wanted to.

In the end I ended up with about 500 subscribers and an average daily unique visitor count of 1000. 500 subscribers in the first 7 days of a site's life isn't too shabby. I haven't been lucky enough to get any press from sites like Techcrunch, Wired, or Gizmodo, nor any interviews from Fox or MSNBC but I firmly believe if I keep working at it I can make it a great success. If you have any questions or feedback I'd love to hear them.